The Sydney Journal is a peer reviewed publication that exists as part of the online Dictionary of Sydney. We publish scholarly articles about all aspects of the rich natural and human history of the region now known as Sydney, from the earliest human habitation to the present. Our interests include natural forms, zoology, botany and geology, and built forms, those present and those lost through demolition or the passage of time. Our canvas stretches from Pittwater to Port Hacking and out to the Blue Mountains to encompass the whole of the Sydney basin.

Vol 5 No 1 (2017): The first governor – A bicentenary symposium on Arthur Phillip 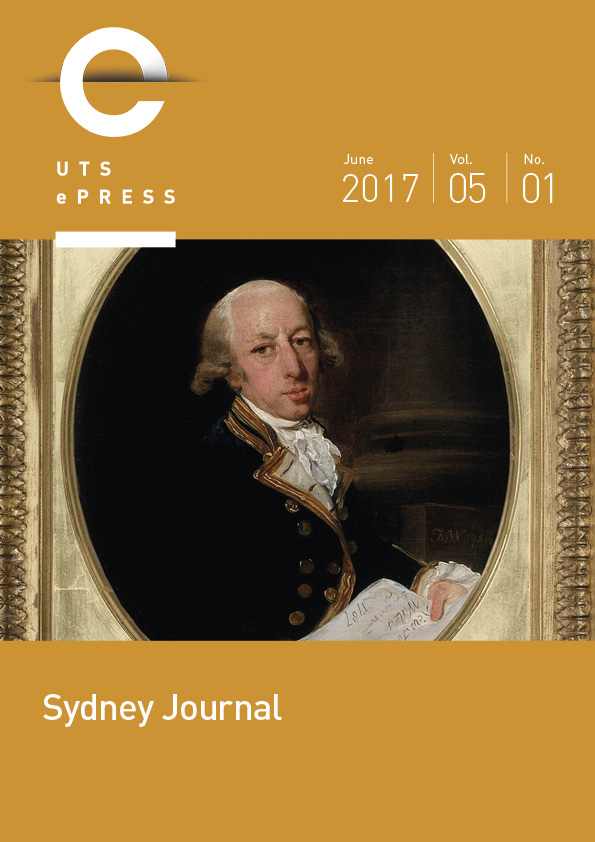 A selection of papers presented at 'The First Governor - A Bicentenary Symposium on Arthur Phillip' on 5 September 2014 at Sydney Living Museums to commemorate the bicentenary of Arthur Phillip's death. In this special issue of the Sydney Journal some of Australia's most significant scholars of colonial history reveal the contributions Arthur Phillip made to the founding of modern Australia. From his role preparing for the voyage of the First Fleet, to his five years as the colony's first governor, the symposium was a fascinating and intimate exploration of the founding of the colony, and the life, career and continuing importance of the man who governed it. Cover image: Captain Arthur Phillip, 1786, painted by Francis Wheatley Courtesy Mitchell Library, State Library of NSW (ML 124)

Table of Contents: The first governor – A bicentenary symposium on Arthur Phillip.

Arthur Phillip: Commodore of the Fleet

Phillip and the Eora: Governing race relations in the colony of New South Wales