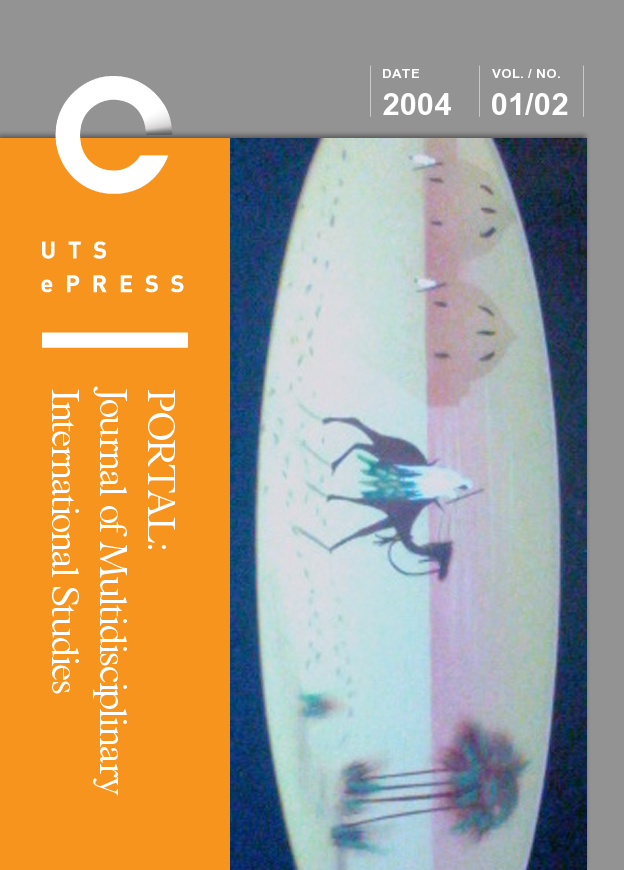 Since the highly successful inauguration of PORTAL in January 2004, we have received many kind expressions of support from international studies practitioners in a range of fields, and from such places as Canada, Italy, Mexico, Nigeria, New Zealand, Spain, Trinidad, the U.K., and the U.S.A. Particularly gratifying have been the endorsements of the journal and its publishing aims by people involved in their own electronic publishing enterprises.

For their generous responses to PORTAL, the Editorial Committee would like to express its collective appreciation to the following people: Professor Jean-Marie Volet, of the University of Western Australia, and the guiding editor of the ground-breaking e-journal Mots Pluriels (www.arts.uwa.edu.au/MotsPluriels); and Francis Leo Collins, member of the Editorial Committee for the Graduate Journal of Asia Pacific Studies (GJAPS), based in Auckland, New Zealand. PORTAL's readers may be interested in the current call for papers from GJAPS (www.arts.auckland.ac.nz/gjaps), for a special issue on "Imagining the Asia-Pacific" (deadline October 31, 2004).

This issue of PORTAL contains essays that cover wide terrain: the Chilean diasporic community in Australia; the world of German intellectuals; contemporary Mexican socio-political movements; rural-urban migration in China; and transnational advocacy networks and election monitoring in the Philippines, Chile, Nicaragua and Mexico. In the cultural section of this issue, we are delighted to present a short story from the noted German Studies scholar Anthony Stephens, and the first half of a beautiful, deeply poetic and haunting novel entitled Son, from the London-based writer and art-critic Jennifer Higgie. The novel’s second and final part will appear in PORTAL vol. 2, no. 1, in January 2005.

On a different note, we would like to express our support for the inaugural Ubud Writers and Readers Festival, to be held in Ubud, Bali, from October 11 to 17, 2004. The Festival, which is attracting interest from writers across the world, maintains a website at: http://www.ubudwritersfestival.com/ Finally, I would like to remind readers that the next issue of PORTAL (vol. 2, no. 1, January 2005) will be a special issue devoted to "Exile and Social Transformation." I would also like to encourage international studies practitioners and cultural producers working anywhere in the world to submit material for future issues.

Paul Allatson completed his doctorate at the University of New South Wales (Sydney, Australia) in the area of U.S. Latino cultural studies. His research currently focuses on the resistant potential of politicised Latino cultural production, and on the place of Latinos in U.S. popular culture. He is also interested in Anglophone and Hispanophone postcolonial, transcultural, and queer theoretical traditions. He has published widely in those areas, and is the author of Latino Dreams: Transcultural Traffic and the U.S. National Imaginary (Rodopi Press, 2002). Further information may be found at: http://datasearch.iim.uts.edu.au/iis/about/staff.lasso
Make a Submission
Information
About the Journal