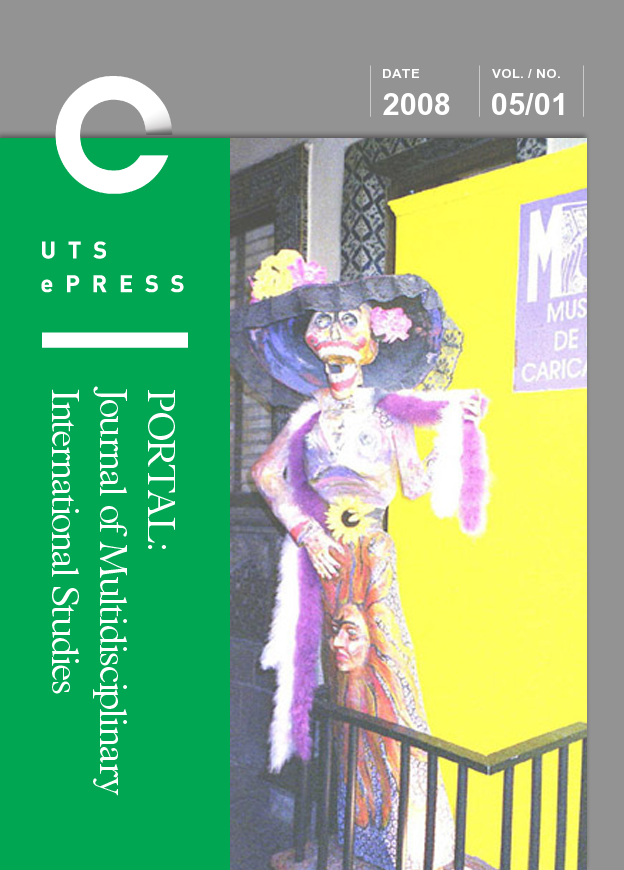 The first issue of PORTAL Journal of Multidisciplinary International Studies for 2008 is a special issue with the title “Hyperworld(s): Language, Culture, and History in the Latin American world(s),” guest edited by Jeff Browitt and Paul Allatson (University of Technology Sydney). The issue—comprising related essays and cultural works—evolved from the 2006 biennial conference of the Association of Iberian and Latin American Studies of Australasia, “Hyperworld: language, culture, history,” held at UTS in September 2006.

The issue, like the conference before it, explores the place of Latin America in what the editors call “hyperworld(s).” The term connotes acceleration and hyperactivity on social, economic and financial levels, the intensified commodification of most aspects of human life, the time-space compression of communication and much cultural production, the re-ordering of social relations themselves over-determined by technology wedded to capitalist market values, and, as a result, the re-ordering of daily life, cultural expression, human desires, and political activism for individuals and communities across the planet. These processes and intensities mean that new modes of reading the interactive and contradictory discursive fragmentations of the current age are required. Thus, rather than regarding cyberspace as the age’s technological hallmark or dominant trope, the special issue asks how we might make deeper sense of hyperworld(s)—the bracketed plural implying myriad intersecting worlds within ‘the’ world, those worlds including various Latin Americas—by identifying how the interactive logics of virtuality suggest narratorial entry points into contemporary lived historical-material and imagined complexities and potentials in the Latin American world(s).

This issue of PORTAL also contains two essays in its general section, both dealing with Turkey. The first, by Ariane Bogain and Florence Potot, “From the Stereotypification of the Non-European Other to the Prototypification of the European Self: A Case Study of Turkey’s Membership to the European Union from the French Perspective,” utlizes French media coverage to dissect the ambivalences and stereotypes inherent to the ongoing attempt by Turkey to become a member of the EU. The second essay, Iain Smith's “The Exorcist in Istanbul: Transnational Processes of Intercultural Dialogue within Turkish Popular Cinema,” discusses the 1974 film by Turkish director Metin Erksan, an unofficial remake of William Friedkin’s The Exorcist (1973). Smith argues that the film, and its reception, calls for a reading based on a more nuanced model of cross-cultural exchange, dialogue and interaction, as befits the broader interstitial relationships through which cultures, and their cinematic and popular cultural productions, meet and interact in Europe today.

Finally, I would like to draw readers’ attention to the call for papers for a special issue on contemporary Italian cultural Studies, scheduled for July 2008.