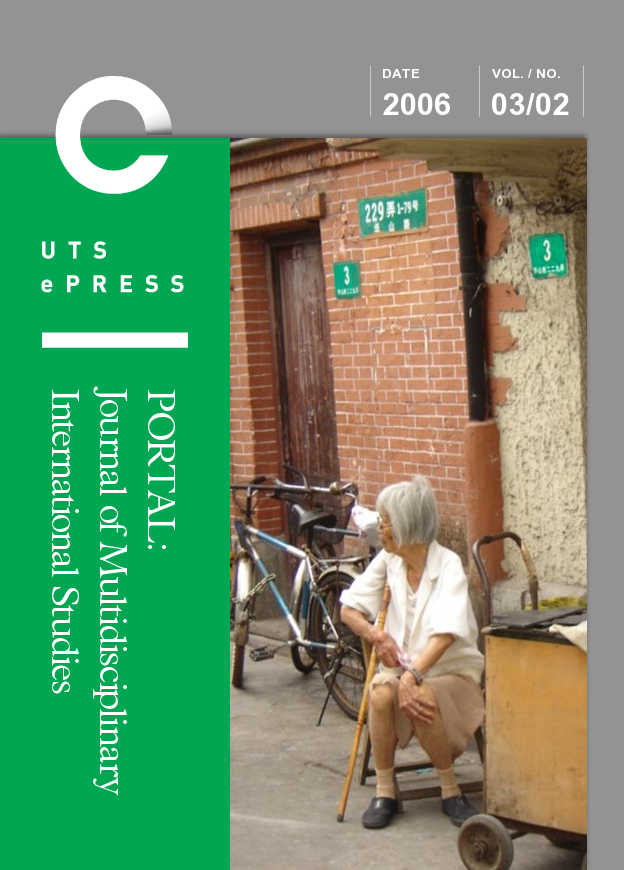 The second issue of PORTAL Journal of Multidisciplinary International Studies for 2006 features a special selection of essays grouped under the title ‘Women in Asia’ and guest-edited by Devleena Ghosh and Barbara Leigh, both from the University of Technology Sydney. The essays in this special issue had their first incarnations at the Eighth Women in Asia Conference, ‘Shadow Lines’, organised by the Women’s Caucus of the Asian Studies Association of Australia and the University of Technology Sydney (convened by Ghosh and Leigh), and held at the University of Technology Sydney from 26 to the 28 September 2005. Aiming self-consciously and tacitly to toy with, and dispute, the historical and discursive valencies accruing to the key, twined terms ‘women’ and ‘Asia’, the ten essays grouped here combine to form a rich repository of contemporary research about the status of women in many parts of that vast, arguably incoherent, geocultural space called Asia. All of the contributing authors thus ‘attempt to unsettle discourses about limits,’ to cite from co-editor Devleena Ghosh’s opening paper. That attempt is far from straightforward, as Ghosh elaborates: ‘That lines, borders and boundaries exist, whether of prejudice, politics, economics, or culture, is undeniable. But how do we analyse these issues without ossifying them, creating implacable alterities that refuse the liminal spaces that people occupy?’ Multivalent solutions are called for, Ghosh suggests, and these are to be found not simply in ‘counter-politics and interventions’, but also through the excavation and recognition of multiple subjectivities from/in ‘a thousand plateaus, [and] felt and experienced through the body, historical landscapes, domestic spaces, through performance as well as through the realm of the imaginary, in the impact of ideals and the weight of history’.

In addition to the special section on ‘Women in Asia’, this edition of PORTAL contains two essays in its general academic section. François Provenzano’s ‘Francophonie et études francophones: considérations historiques et métacritiques sur quelques concepts majeurs’ offers a sustained meditation and critique of the discourse of Francophonic unity, and suggests a range of possible critical directions for future research into the study of French-speaking zones, peoples and cultures. Barbara Elizabeth Hanna and Juliana de Nooy’s ‘The Seduction of Sarah: Travel Memoirs and Intercultural Learning’, focuses on a big-selling memoir that was also something of a media-sensation on its publication in Australia in 2002, expatriate Australian journalist Sarah Turnbull’s account of her ambivalent ‘new life’ in Paris, France, after her marriage to a local: Almost French: A New Life in Paris. Interested in Turnbull’s autobiography as a potentially useful and productive classroom text for demonstrating, and enabling discussion of, intercultural difference, the authors’ rich analysis demonstrates that such texts present a host of problems to the teacher keen to work with students’ self-critical capacities to locate themselves in international and transcultural frameworks.

We are delighted, as well, to present three cultural works in this issue: Katherine Elizabeth Clay’s evocative ‘comic’ narrative of study abroad, ‘From Penrith to Paris,’ itself a lively visual-textual antidote to Turnbull’s ambivalently romanticized view of (not-quite)-belonging in Paris (as discussed by Hanna and de Nooy in this issue); a typically idiosyncratic satire about the current German Chancellor, Angela Merkel, from Anthony Stephens, expertly deploying an ancient Celtic narrative verse form; and California-based Chicana writer Susana Chávez-Silverman’s code-switching chronicle/crónica, ‘Oda a la ambigüedad Crónica,’ a beautifully concise exploration of loss and the sensory regime of memorialisation.

Paul Allatson is senior lecturer in Spanish Studies and US Latino Studies at the Institute for International Studies, University of Technology, Sydney. He completed his doctorate at the University of New South Wales (Sydney, Australia) in the area of U.S. Latino cultural politics. His research currently focuses on the resistant potential of politicised Latino cultural production, the place of Latinos in U.S. popular culture, and questions of Latino cultural citizenship. He is also interested in Anglophone and Hispanophone postcolonial, transcultural, and queer theoretical traditions. He has published widely in those areas, and is the author of Latino Dreams: Transcultural Traffic and the U.S. National Imaginary (Rodopi Press, 2002) and Key Terms in Latino/a Cultural and Literary Studies (Blackwell Press, 2007).
Make a Submission
Information
About the Journal