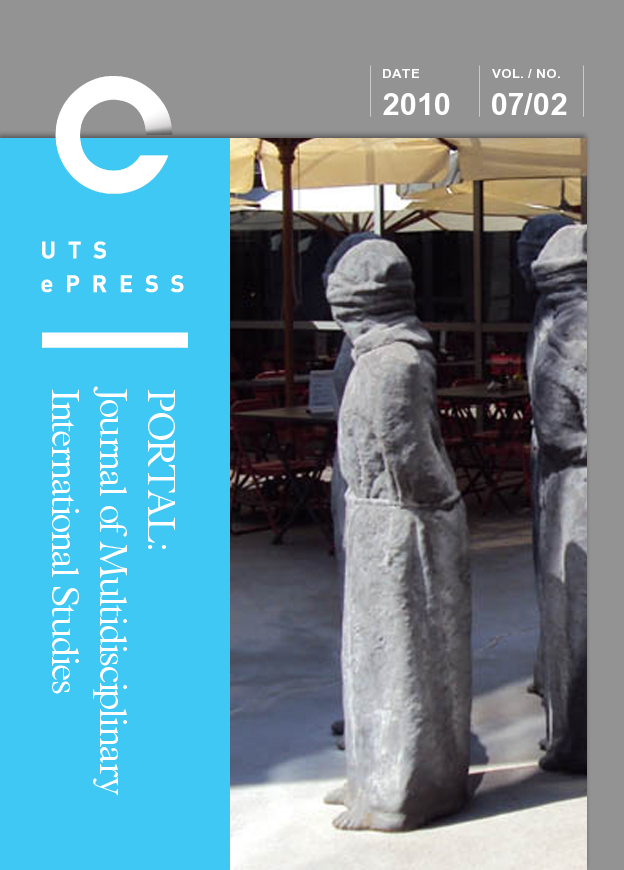 This issue of PORTAL Journal of Multidisciplinary International Studies comprises five articles in its general essays section, and two works in its creative works section. We are delighted with the inclusion of the first three essays: “‘A Bit of a Grope’: Gender, Sex and Racial Boundaries in Transitional East Timor,” by Roslyn Appleby; “Undermining the Occupation: Women Coalminers in 1940s Japan,” by Matthew Allen; and “Pan-pan Girls: Humiliating Liberation in Postwar Japanese Literature,” by Rumi Sakamoto. These essays were presented in earlier formats at the two-day workshop, “Gender and occupations and interventions in the Asia Pacific, 1945-2009,” held in December 2009 at the Centre for Asia Pacific Social Transformation Studies (CAPSTRANS), University of Wollongong. The workshop was convened by Christine de Matos, a research fellow at CAPSTRANS, and Rowena Ward, a Lecturer in Japanese at the Language Centre, in the Faculty of Arts, University of Wollongong. The editorial committee at Portal is particularly grateful to Christine and Rowena for facilitating the inclusion of these essays in this issue of the journal.

Augmenting those studies is “Outcaste by Choice: Re-Genderings in a Short Story by Oka Rusmini,” an essay by Harry Aveling, the renowned Australian translator and scholar of Indonesian literature, which provides fascinating insights into the intertextual references, historical contexts and caste-conflicts explored by one of Indonesia’s most important Balinese authors. Liliana Edith Correa’s “El lugar de la memoria: Where Memory Lies,” is an evocative exploration of the newly emergent Latin(o) American identifications in Australia as constructed through self-conscious memory work among, and by, a range of Latin American immigrant artists and writers.

We are equally pleased to conclude the issue with two text/image works by the Vancouver-based Canadian poet Derek Symons.